Following the racist abuse that several England players received at the end of the Euros in 2021, McCann London teamed up with Show Racism the Red Card for this project that sets out to educate people that we should champion the diversity of the England team, not criticise it. Immigration and diversity have shaped the modern game of football, and without this it’s no exaggeration to say that the England squad wouldn’t be what it is today. 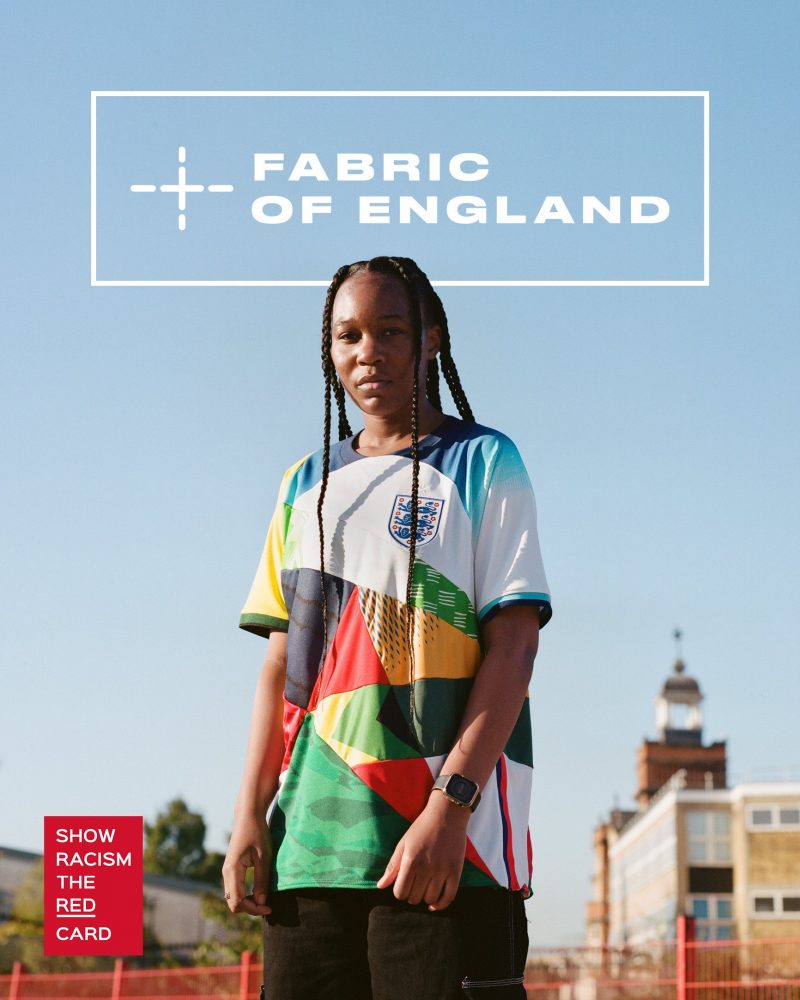 Of the 39 players that helped England qualify for the World Cup, almost all of them have migration stories. Using this insight, a specially designed football shirt was created to showcase the many nations that make up the England squad. The shirt resembles a ‘patchwork quilt’ design, created from the England shirt and 13 other national football team shirts.

SRtRC will be using the shirt during our educational workshops at schools and campaign events over the duration of the World Cup to raise awareness of the diversity and heritage or the England team.

You can read more about #FabricOfEngland here.

You can also be within a chance to win one of these exclusive limited edition shirts by entering our competition over at the Show Racism the Red Card instagram page! Click here to learn more.

As well as being within a chance to win one of the original exclusive shirts we are also looking in to creating a limited release of replica’s due to the overwhelming interest we have had. Keep a look out for more news on this!

“It’s a celebration of our differences – the countries, languages and cultures. And also celebrates the similarities- the shared joy, expression and hope. The World Cup, every four years, shows us that we only witness the best of us when we champion our differences hand in hand with our similarities.

“This shirt is another step towards highlighting the diversity which has made football the international phenomenon that it is today. People all around the world identify with the skill and entertainment that the sport offers us, and as such it has the power to unify us globally. Visually, the shirt demonstrates us coming together with a common appreciation of football”

“The role of Black people have been significant in England. The wave of immigration started following the Second Word War and the invitation to rebuild the UK bringing skilled labour and impacting massive cultural change. Thereafter the societal impact which followed particularly with sport, music and notably football has made a colossal impact in this country”

Paul Elliott (former Chelsea and Celtic) now at the FA

We welcome Gareth Southgate’s decision for the England team to take the knee at the World Cup.

The North East of England African Community Association (NEEACA), founded in 1997, is a long-standing united body for all Africans, those of African descent and those committed to the well-being of Africa and Africans. Working with other voluntary groups, local authorities and government agencies.